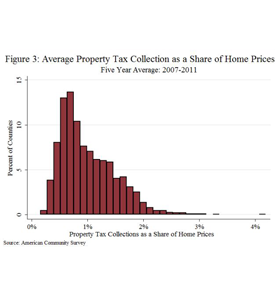 How are Property Taxes Determined?

Average county-level residential property tax burdens tend to be close to $1,000 per year, with a small share of states averaging substantially more. Between 2007 and 2011, 60 percent of counties had average tax burdens between $500 and $1,500. Homeowners in about 13 percent of counties paid less, on average, and 27 percent paid more. 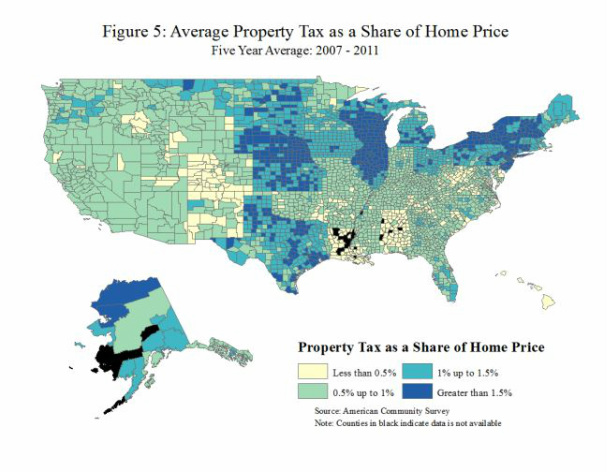 Property taxes are a major source of revenue for localities in the United States. In 2011, property taxes made up 34.6 percent of total local revenues and 63.9 percent of local own-source revenue (Barnett and Vidal 2013). Property taxes tend to be a stable source of revenue, as many localities set a revenue target to meet expenditure needs and then vary the tax rate to meet this target, conditional on the tax base (total taxable value of real estate). Even in the aftermath of the Great Recession, in which property values in the United States underwent historic declines, property tax revenue fell less than house prices did. After 2008, property taxes as a share of local revenues increased, largely due to the decline in other revenue sources, which responded more quickly to the Great Recession than did property taxes. (Urban Institute, TaxPolicyCenter.org)

Appealing Property Taxes: A homeowner or homeowner's authorized representative must prove to the county, with extensive evidence, that the assessed value is inaccurate in relationship to home values in the area. The main method of protest is the valuation argument. The valuation argument utilizes comparable home sales (COMPS) in your immediate area to determine a price per square foot of an extremely similar house. If you can prove that a different, yet very similar house in the same area sold in the past 9 months at a lower value, then you have an argument to lower your assessed property value, subsequently lowering your tax burden.

You will need to fill out a property tax appeal form, meet all deadlines (usually a 15 to 45 day window), provide extensive evidence, and write an abstract of your argument. Make sure to take into account the assessment ratios and to not fight for "lower taxes" rather "lower assessed value" and to equalize your property based on square footage. Be sure to file with the right department and to fill out one protest per unit.

If you would like us to help you with this process, please contact us today in order to beat the deadlines and reduce your property taxes with zero money down!